There is a true discipline when it comes to being a competitive snowboarder. Understanding that all your training comes down to this moment - a moment that your coaches have prepared you for mentally and you have replayed over in your mind, time and time again.

This season has proven to be fruitful for William, as he has been strong on the snow and even more motivated mentally. This has been the year he has improved the most and has attempted to learn everything about having a competitive spirit. Let’s enjoy few highlights from various competitions William has participated in this year. 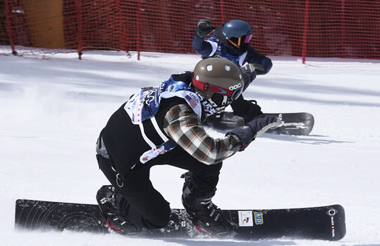 Olympic (once every 4 years), World Cup series (every year), and NorAM and Europa Cup series. You can't race on NorAM until you're 15 years old. Below NorAM racing is USASA age group racing. Since Wm turned 15, he's been racing both NorAM and USASA age group. Now that he's won Nationals at the age group level, he'll just compete at the NorAM level.

INITIAL SUCCESS
In the Fall of 2017, Olympian AJ Muss made 2 of his technical, competitive training Black Pearl snowboards available to William. One board was to replace the SL board William cracked at Nationals and the other board was to provide a stiffer competitive board for GS. William knew both boards would be stiff and torsionally rigid. He couldn’t wait to get on snow to test them out. But the 2017-2018 competitive season launched at Howelsen Hill in Steamboat Springs, CO before on snow training could even being in the East – and barely in the West! William’s test runs prior to competition consisted of a couple passes on each board down Heavenly Daze, only trail open at Steamboat! One of William’s coaches was on the World Cup tour prepping an Olympic athlete, but his other coach accompanied him to Howelsen Hill for the first NorAM competition of the season. It was William’s first visit to historic Howelsen Hill. Howelsen Hill Ski Area has sent more skiers to international competition than any other area in North America. It is the oldest ski area in continuous use in Colorado, and has the largest and most complete natural ski jumping complex in North America. Howelsen has been the training ground for more than 79 Olympians making over 130 Winter Olympic appearances, 15 members of the Colorado Ski Hall of Fame, and 6 members of the National Ski Hall of fame. After his first podium finish at the 2017 USASA National Championships, William and his coaches agreed that his goal for the 2017-2018 season would be to make it to a NorAM final. Despite no on snow training, all new equipment from boards to boots, and the steepest competition trail on the NorAM circuit, William achieved his season goal in the first GS race of the season! (He must have been inspired by the Howelsen legacy!) It was a real thrill!
CHALLENGES
After the thrill of reaching finals at Howelsen, William’s season started to unravel. He was having real issues turning his new boards. Should he ride more forward on the nose of the boards? Or ride in his back seat on the tail of the board? Should he lose the Vist plate? There would be entire practices that he didn’t have a clean run. The boards were beginning to ride him. He landed in the B-netting at Buck Hill and had to be cut out. He couldn’t even win a USASA regional race. All winter William went to practice and continued to grind it out cold evening practice after another in the awful Eastern snow conditions. His confidence was seriously shaken. His parents wondered if it was even worth it to take him to the 2018 USASA Nationals.
THRILL OF VICTORY
William arrived at the 2018 USASA Nationals with no expectations. His parents had no expectations. But after his first day of BKPro camp, William knew he liked the snow and knew after months of training that he was going to be able to bend his boards. The question was how well he was going to be able to bend them. William maintained his health at altitude in the week before the competition. He ate nutritionally dense food; he stayed hydrated; he got plenty of sleep; and he continued to train on the Colorado snow. William’s podium in GS on the next to last day of competition wasn’t a complete surprise. The GS course is straighter and doesn’t require the technical turns of SL. Nevertheless, it was a thrilling finish! The last day of competition was a brilliant blue bird day. But, a nasty storm was moving in mid-afternoon. William didn’t know, but that morning his mom had made the decision to head out of the mountains ahead of the potentially dangerous road conditions and down to Denver ahead of the storm. She didn’t even bother to go watch William’s SL competition. She wanted to be packed when William came back to the condo. And, William had not performed well all season in SL anyway. Surprisingly, William qualified second overall in the SL finals. Then William kept racing. And he kept moving through the brackets. Then he beat his teammate, who he hadn’t beaten all season. And he won! William won Gold! On the last day, in his last chance at an age group title, William became a National Champion!

William incorporates alpine snowboarding into his classwork. Over two years from 2013 - 2015, he completed a science fair project with Coach Neil Sunday that led to his project gaining an Office of Naval Research - U.S. Navy and Marine Corp award for research at the Capital Area Science and Engineering Fair. His award-winning project was Which Wax on a Snowboard Makes You Go Faster Given the Snow Conditions?

William’s riding has been a story of progression! In 2016 and 2017, he was the Mid Atlantic region’s top qualifier in Slalom. He podiumed in Giant Slalom at USASA Nationals in 2017. He joined the NorAm tour in 2015 as soon as he turned 15. He was named a Reserve for the FIS Snowboarding Jr. World Cup Championships in The Czech Republic in 2017. And in June 2017 William was invited to attend US Ski and Snowboard’s Project Gold camp, a development program for the sport’s top ranked junior riders. He looks forward to continued improvement and success in 2017 and beyond!

Still Striving For The Top

And in June 2017 William was invited to attend US Ski and Snowboard’s Project Gold camp, a development program for the sport’s top ranked junior riders. He looks forward to continued improvement and success in 2017 and beyond!